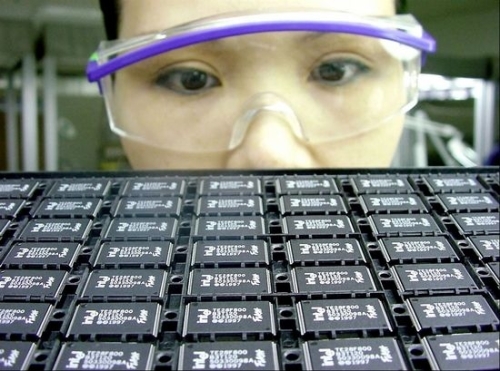 This bankruptcy news immediately provoked a "wave" in the global memory industry. According to data from Taiwan's DRAMexchange, the spot price of DRAM chips rose sharply on February 28. The price of mainstream DDR3 (double data rate 3) rose by 13%.

Elpida mainly produces DRAM, which is an essential component of the computer - dynamic semiconductor memory. Since DRAM chips are processed into strips and inserted into computer slots, they are also called memory modules.

The impact of Elpida's bankruptcy has quickly spread to the Chinese market, and memory quotes rose by 10% to 25% yesterday.

This is not yet all Elpida bankruptcy story. â€œNihon Keizai Shimbunâ€ commented that Elpidaâ€™s bankruptcy was simply a textbook case in which the government directly intervened in the ineffective operation of private enterprises.

Xinhua News Agencyâ€™s essay on February 28 summarized the ins and outs of this classic case.

As the only DRAM manufacturing company in Japan, Elpida's ending shows that in the tide of reshuffling in the global electronics industry, escort by the state alone does not ensure that companies survive the cruel competition.

Elpida was born in 1999. It actually integrates the DRAM business of Hitachi, NEC and Mitsubishi Electric. The establishment of the Elpida itself will have the will to protect the Japanese DRAM industry.

However, such a company that received special preferential treatment from the Japanese government failed to survive the low tide of the memory industry. In the financial crisis of 2008, the global demand for DRAM continued to decrease substantially, and the prices of products also fell further. Elpida was on the verge of desperation.

The Japanese government once again extended a helping hand to Elbida. In 2009, under the guidance of the Japanese Ministry of Economy, Trade and Industry, Japan passed an amendment to the â€œIndustrial Recycling Act,â€ which authorized the Japanese government to provide assistance to private companies that have internationally advanced technologies but face operational difficulties. In June 2009, Erbi reached the first beneficiary of the new law. Japanese policy investment banks injected 30 billion yen (about 370 million U.S. dollars) into them, and other major financial institutions provided about 100 billion yen (about the same amount). The $124 million loan actually became Japan's "national policy company."

However, the good times are not long. Despite the government's capital injection and policy support, Elpida has experienced no significant improvement in the following operations: the appreciation of the yen, the strong rise of South Korean counterparts, the decline in market demand and product prices. The financial report issued by Elpida at the beginning of this month showed that in the April-December 2011 final account, the company had a loss of 98.9 billion yen (approximately 1.2 billion U.S. dollars).

According to reports by Japanese media, after applying for bankruptcy and reorganization, the principal and interest amount of defaulted debts issued by Elbida, including ordinary corporate bonds and convertible corporate bonds, will reach 138.5 billion yen (approximately US$1.7 billion). Some of the public funds previously invested by the Japanese government will also be unable to be recycled, adding up to 28 billion yen (about US$350 million) to the national burden.

In addition, Elpida stocks will be delisted from the Tokyo Stock Exchange on March 28.

Ironically, the high-ranking officials of the Ministry of Economy, Trade, and Industry who had been supporting Elpida for the past year were arrested for insider trading, and their alleged insider trading targets also included Elpida stocks.

The decline of the outdated Japanese model Elpida is also a microcosm of the serious situation faced by the Japanese electronics industry in recent years.

Gu Wenjun, Chief Analyst of iiSuppli China, said yesterday to the Morning Post that Elpida's fall and many Japanese electronics companies, including the color TV industry, are in trouble, indicating that Japanese companies have no longer competed in the business model of quality and scale. Force, the new trend of the global electronics industry is innovation and rapid adaptability. Not being able to change in time means being eliminated by the market.

So far, Elpida still mainly provides computer memory instead of the mobile product memory industry, and has not been involved in flash memory for digital cameras and smart phone memory. Samsung, a competitor, has long been aware of this, and has begun to transition to diversified production to cross subsidize its DRAM operations.

Like Japan, which is a large-scale enterprise, South Korea also takes the strategy of supporting large enterprises. However, large companies such as South Koreaâ€™s Samsung Electronics are more open than Japanese companies and are good at integrating global resources.

Gu Wenjun said that the raw materials needed by Japanese companies, including Elpida, will only be purchased from Japanese companies. Due to concerns about conservative decisions such as the outflow of technology, they do not set up factories abroad and are unwilling to share technology with their partners.

"Now there are many innovative small businesses emerging in the field of chip design. These small companies have made fast decisions and many innovations, but Japan has been supporting big companies in the early days. This has caused pressure on Japanese small businesses. After these large Japanese companies are in trouble, There is no small business growing up to take over as the successor, which is making Japan's electronics industry increasingly less competitive." Gu Wenjun also believes that the conservative style of Japanese companies has not changed so far. Japan's "3.11 earthquake" occurred after the exodus of the factory last year If you choose Southeast Asian countries, they are reluctant to come to China. This will make Japanese companies lose their opportunities again.

After touching the global memory version of Turbida for bankruptcy protection, some people rejoiced.

Taiwan was the most nervous. After the bankruptcy of Elpida, Taiwanâ€™s â€œMinistry of Economic Affairsâ€ and the â€œGold Management Committeeâ€ urgently explored countermeasures on February 28, and stressed that the governmentâ€™s assistance to Taiwanâ€™s DRAM industry â€œunify the United States and Japanâ€™s resistance to South Koreaâ€ remains unchanged. Although Elpida currently has conditions, the variables will be a bit larger, but efforts will continue.

Elpida is inextricably linked with Taiwan. It is not only TDR (Taiwan Depositary Receipts) issued by Taiwan's first Japanese company, but also an important partner of Taiwan chip company Power Crystal Technology Co., Ltd. There is a joint venture Ruijing Electronics. (Editor's note: DRAM prices collapsed during the global financial tsunami in 2008. At that time, Taiwanâ€™s regional leader Ma Ying-jeou shouted â€œNo saving DRAM, no match for leadersâ€. He planned to promote technical cooperation with Elpida and fight against maximum competition. It was against South Korea, but this plan was ultimately dead because Taiwanâ€™s "Legislative Yuan" did not want to pass the budget.)

Rui Jing Electronics said on February 28 that after Elpida filed for bankruptcy protection, it has stopped selling DRAM chips to the company.

Since the beginning of this year, Elpida has owed Rui Jing Electronics with a total amount of USD 135.1 million, which may not be recoverable in the short term.

Although the stock price is gratifying, Taiwan's DRAM makers are still more worried than joy. The good news is that the DRAM market has long been oversupplied. The miserable situation has the opportunity to change. What worries is that the global DRAM industry may enter the Korean-U.S. monopoly, and even the Korean factory monopoly.

Market research company IHS iSuppli's data shows that as of last September, Elpida and the United States of America's Micron Technology tied for the world's third largest DRAM manufacturers, each with 12.1% market share. Samsung Electronics ranked first in the market with a leading share of 45%; South Korea's Hynix Semiconductor ranked second, with a market share of 21.5%.

Gu Wenjun believes that after the bankruptcy of Elpida, the global memory market will turn oligopolistic from the original oligopoly. Due to the already high market share of Samsung Electronics and Hynix, if you continue to expand market share, you may break the law. The anti-monopoly law has been warned by the U.S. government, and Micron is taking this opportunity to fill Elpida's market share. Samsung Electronics has claimed that it is not interested in heavily indebted Elpida and will not consider collaborating with Elpida.

Micron and Elpida had previously planned to cooperate. Gu Wenjun said that before Micron originally wanted to purchase Elpida's factory in Hiroshima, Japan, but due to the death of Micron CEO Upton in February of a private plane crash, it led to cooperation.

Koreaâ€™s â€œKorean Dailyâ€ also believes that Micron Technology may purchase Elpida. Once this matter is completed, its share will increase, threatening South Koreaâ€™s Samsung and Hynix.

Japanâ€™s â€œYomiuri Shimbunâ€ reported that Micron Technology is the most promising support company, but Toshiba and Korean companies may also support Elpidaâ€™s reorganization. On the evening of February 27, Japanese Minister of Economy, Industry and Commerce Yukio Noda expressed that he hopes to maintain the domestic DRAM production base as much as possible.

2, 7/9/10.1 inch monitor has a pixel resolution of 800 x 480 and displayed is a sharp clear digital image. Monitor has 2 Channel Video Input; V1/V2 optional. PAL&NTSC for choose. Monitor automatically turns on and switch to rear view camera when reversing.

5, System comes complete with a 66'(20 Meters) cable with aircraft grade connections and all components necessary for installation.