At the just-concluded 2016 China International Big Data Industry Summit and China E-Commerce Innovation Summit (the â€œDigital Expoâ€), Premier Li Keqiangâ€™s â€œKuzhou Sampleâ€ was turned into a â€œWestern Underdeveloped Provinceâ€ in Guizhou. There is a vivid discussion:

"Guizhou has developed 'nothing' in the development of big data, cloud computing, and the Internet of Things, and has also brought vitality to Guizhou's advanced industrial products around information technology. The development and changes in Guizhou are illustrated in big data, Under the background of the development trend of the new generation of Internet represented by cloud computing and the Internet of Things, all countries and regions can stand on the same starting line as long as they work hard, and even backward places can even seize the opportunities."

Innovative entrepreneurship in the field of big data technology has made Guizhou, an underdeveloped province that has never been in touch with high technology, standing on the cusp of the times. Many people are puzzled: everywhere is vigorously developing big data, why is Guizhou a sudden rise?

Guizhou Gaoxin Wingyun Technology Co., Ltd. is a big data enterprise that provides cloud computing services in Guizhou in 2014. From the experience of its general manager Xu Ning, you can find the answer: â€œThe most impressed by Guizhou is the governmentâ€™s groupâ€™s sense of forging ahead and even Beyond the enterprise. This change in thinking kinetic energy is the biggest driving force for social progress."

The industry believes that Guizhou is able to â€œstraight and straightenâ€ in the development of big data industry. One important reason is that the Guizhou government is working hard to build a professional service-oriented government. In the industrial layout, industry selection, and industrial cultivation, only a specialized government can conduct market-oriented research, investigation, and decision-making, promote marketization, and promote the rapid growth of the technology economy industry.

In sharp contrast to this, in recent days, the news of Huawei's move has sparked heated discussions. The discussion of â€œDon't let Huawei runâ€ almost detonated the technology industry circle. Although Huawei officially rumors that â€œHuawei has never planned to move its headquarters away from Shenzhenâ€, the concerns of the staff of Shenzhen Longgang District Government will not disappear. The high cost of innovation and entrepreneurship and the development of space have become a constraint. An important factor in the current technology industry.

In recent years, some enterprises have moved out of a certain place for two important reasons: First, the adjustment of the economic structure, some high-energy-intensive labor-intensive industries have moved out or even stopped production, which is inevitable for economic development; the other is in the economy. Under the background of increasing downward pressure and industrial restructuring, some local governments can easily choose the former between the land finance model and the professional service-oriented government, ignoring the key role of the government in cultivating innovative entrepreneurial soil.

It is undeniable that the high-tech industry has many conveniences in the first-tier cities, such as easy access to talents and social resources. However, the lack of government public services and the squeezing of enterprises and talents by high housing prices are becoming common problems in many places in development and transformation.

In fact, Huawei can never run. The premise is that Shenzhen must do its part, build a professional service-oriented government, listen to the voice of the times in the attitude of the service provider, face up to the problems exposed in the development process, fully understand the demands of the enterprise, promote reforms steadily and rapidly, and rebuild the vitality of innovation. And the entrepreneurial atmosphere, it is possible to turn the crisis into opportunities, and then innovate brilliantly. I hope that "Don't let Huawei run" is an example of not only the alarm bell for Shenzhen but also the "sample of Guizhou", which will enable local governments to understand the dangers.

Thermal Overload Relays are protective devices used for overload protection of electric motors or other electrical equipment and electrical circuits,It consists of heating elements, bimetals,contacts and a set of transmission and adjustment mechanisms.

Our Thermal Overload Relays had been divided into five series(as follow),with good quality and most competitive price,had exported into global market for many years:

The working principle of the thermal relay is that the current flowing into the heating element generates heat, and the bimetal having different expansion coefficients is deformed. When the deformation reaches a certain distance, the link is pushed to break the control circuit, thereby making the contactor Loss of power, the main circuit is disconnected, to achieve overload protection of the motor.
As an overload protection component of the motor, the thermal relay has been widely used in production due to its small size, simple structure and low cost. 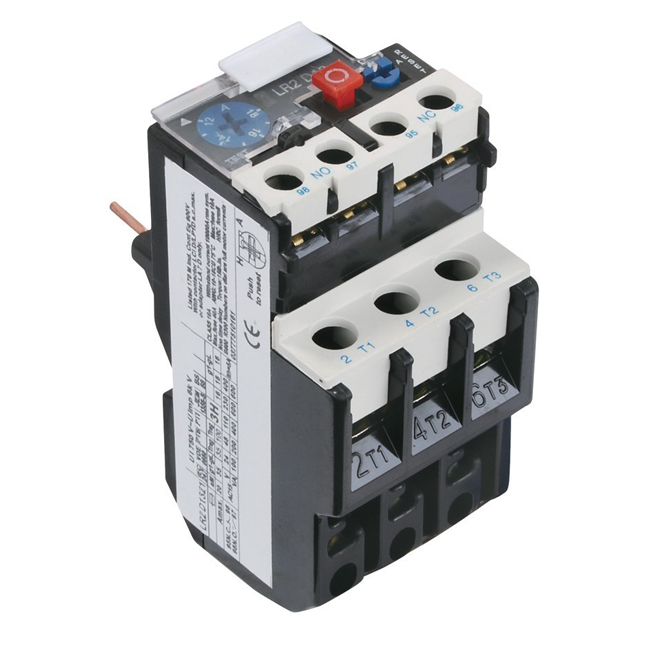